"Is schwa a real phoneme?" asked a first year student, during a preliminary session preparing them for transcription in the second year. What an excellent question!

The issue arose because I had referred them to John Wells' standard lexical sets to describe English vowel sounds more easily. This is a list of English phonemes with keywords devised by Prof Wells and given in his three-volume book Accents of English (1982). Rather than trying to explain in articulatory terms what /ʊ/ is in comparison with /ʌ/, for example, they can be referred to as the FOOT and STRUT vowels respectively, and then discussion about them appearing (or not) in various accents of English can also be facilitated.

However, mid central unrounded vowel [ə] does not appear in this list ... which leads to the very intelligent question about its "realness". 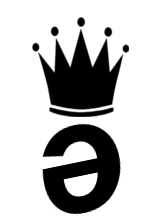 The schwa vowel is the most commonly occurring vowel in reference accents such as RP or Standard Southern British English (SSBE). In articulatory terms, [ə] is a sound which can be produced by basically relaxing the articulators in the oral cavity and vocalising. From that point of view, it is certainly "real".

From a phonological point of view, however, whether /ə/ is a phoneme or not in English is more tricky. There are no single-syllable citation forms of words containing this vowel, so it is not possible to contrast it with other vowels in minimal pairs, as we would normally expect to do with a vowel phoneme (or any phoneme, for that matter) in order to test its linguistic significance/reality. E.g., we can compare the TRAP and START vowels in British English using minimal pairs such as hat /hæt/ and heart /hɑːt/ and demonstrate that, as the meaning of the word is changed by changing the vowel sound, they are therefore separate linguistic units in English. As it's not possible to do this with /ə/, this is probably why it doesn't appear in Wells' lexical sets.

Schwa is a vowel which only occurs in weak syllables in RP or SSBE and is, therefore, never stressed. This might mean you find it in a bi- or multi-syllabic word such as father /ˈfɑː.ðə/, about /əˈbaʊt/ or conglomeration /kəŋˌɡlɒm.əˈreɪ.ʃən/ (note it is also possible to have syllabic consonants in syllables one and five in the last word) or in something called "weak form words" (here's a nice post on the subject by David Brett).

Weak form words are a small group of one-syllable function words - determiners, prepositions, conjunctions, pronouns, modal and auxiliary verbs, etc. - which have a weak and a strong form. The weak form is the one which is most often used.  It is unstressed, and in many instances the word is realised with /ə/ as the vowel. Common weak form words containing schwa include but, and, the, her, of, can and that (when used as a subordinating conjunction) which are often pronounced /bət/, /ən/, /ðə/, /ə/, /əv/, /kən/ and /ðət/ respectively in connected speech.

The alternation between other vowels (sometimes referred to as "full vowels") and schwa results in the distinctive speech rhythm of English accents such as RP and SSBE; this rhythm is often referred to as "stress-timed" (here's a short definition from the British Council / BBC).

But back to whether schwa is a "real" English vowel or not. One could indeed claim that it is not a phoneme in English, as it merely replaces other vowels when they are realised in weak syllables.  If we compare e.g. economy /ɪˈkɒn.ə.mi/ and economic /ˌiː.kəˈnɒm.ɪk/, we can see that /ə/ is standing in for /ɒ/ in the third syllable in economy and the second syllable in economic. The stress patterns of these words are dependent on other factors - in this case, the suffix -ic causes the main stress in economic to be placed on the syllable prior to it, which is different from economy.

However, as it is such a prevalent vowel in reference accents, and such an important part of the pronunciation of those accents, it tends to be accepted as a vowel phoneme in lists of vowels for those accents.

There are, of course, accents of English which do not use /ə/ very much, if at all - particularly those which are developing in regions of the world where other languages do not use it. Here's an example of a poem in Nigerian English in which the speaker talks about [ðɪ ˈpæʃɒn ɒv ðɪ ˈpoːem] (the passion of the poem) instead of /ðə ˈpæʃən əv ðə ˈpəʊɪm/. If you listen to the poem, you'll hear that he uses very few schwa vowels.


Addendum 28/06/2013: Since posting this, I feel I should just add that the standard lexical sets do indeed include lettER /ˈlet.ə*/ - where * stands for possible linking /r/ - and commA /ˈkɒm.ə/ which cover schwa, and also happY /ˈhæp.i/, covering the weak close front unrounded vowel sometimes referred to as "schwee", but that these do not appear in the list I projected for students from Prof Wells's blog post.  The sets still do not have anything official to represent "schwoo", but what regularly gets used as an example of the weak close back rounded vowel (often rather mid-centralised and not very rounded) is thank yOU /ˈθæŋk ju/ and, as John Cowan suggests below, intO /ɪntu/.
Posted by Jane Setter at 07:18